After tons of research, here I am before you with a comparison of these two power-house laptops!

Both are great laptops performance wise, but both of them come with their shortcomings!

I’ll explain what the shortcomings are, but first, let me just straight out share what I think of them and which one should you get and why.

While the CPU in both laptops is very similar in performance, the Asus Zephyrus G14 comes with a higher 1TB SSD storage space, as well as a better and more color-accurate display. The display size on the other hand is smaller and may seem unattractive to some with its lower 120Hz refresh-rate compared to the 15.6-inch and 144Hz on the Eluktronics RP-15. But unfortunately, both of these laptops come with a problem. The problem with the Asus Zephyrus G14 is fixable, but the one with the Eluktronics RP-15 is not, for the time being. 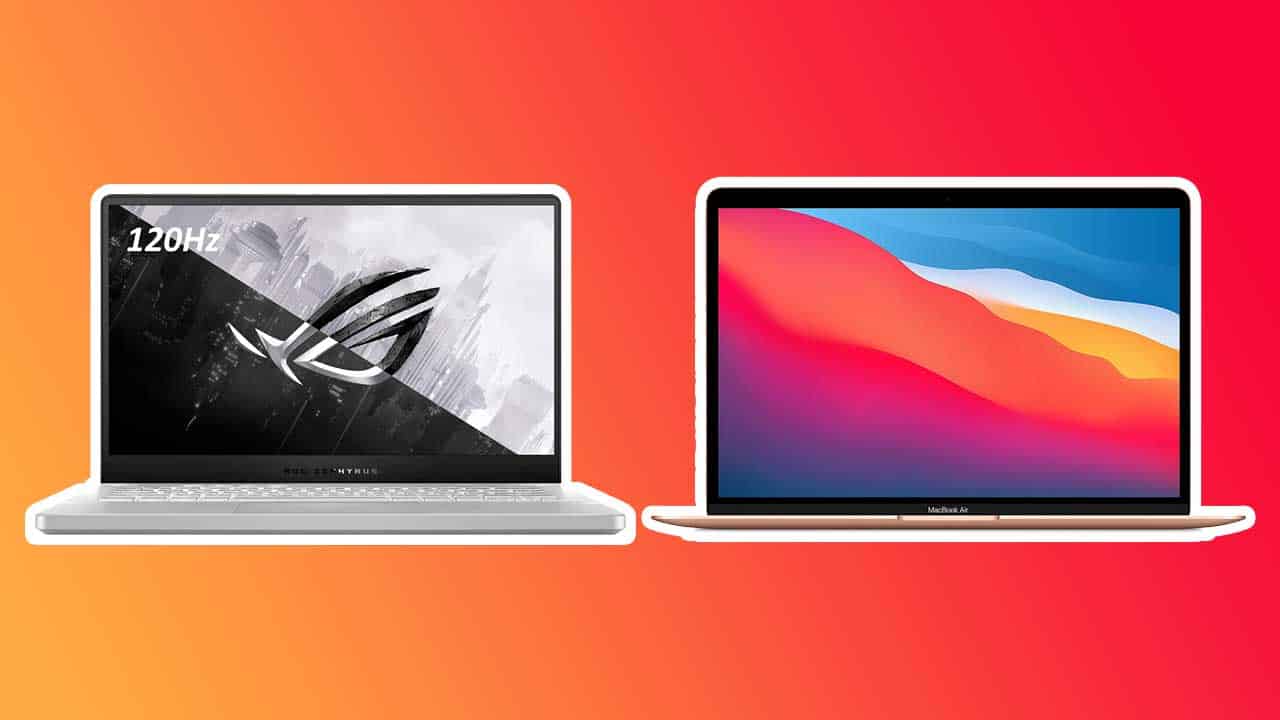 I’ll talk about both of the issues later in the comparison, so please keep on reading…

Let’s take a deeper look at how I came to the above conclusion, and what are the “problems” that I noticed in both laptops, and which one is unfixable for the moment and why is it unfixable.

Let’s kick things off with the CPU talk.

Both of these great performers come with Ryzen processors. You may be wondering which one outperforms the other? Well, they both are almost very similar in performance.

I even watched this 6-minute YouTube video to make sure that what I share about the processors is accurate and represents real-world performance. So yeah, according to these benchmarks that the guy has done beautifully explaining things, both of these processors are almost similar.

The 4900HS is a bit ahead sometimes, and the 4800H is ahead other times, because of the higher TDP or the more power it has programmed to consume compared to the power-saving CPU that the 4900HS is in the Asus Zephyrus G14.

Overall, you won’t be disappointed with the performance from either of these beasts!

Right off the bat, the Asus Zephyrus G14 seems like more of a ‘lighter’ performance device that is focused on saving power when it doesn’t need to spend it and giving you more battery life as well as lower than expected fan noise. Because the R9 4900HS paired with an RTX 2060 Max-Q suggests that this is focused on saving energy and giving you raw performance when you are in need of that performance, otherwise, keep it as light as possible on the power consumption.

The RTX 2060 in the Eluktronics RP-15 is slightly faster than the Max-Q version in the Asus Zephyrus G14, because of the higher clock speeds. Nothing that would change my mind, or should change your mind about either of these great options!

Both laptops come with 16GB of DDR4 3200MHz RAM that should be more than enough to get you started for some beginner level creative tasks, or beginner level of gaming these days, as some games require you to have 16GB of RAM to even launch the game, let alone play it.

As I always say, you should get at least 16 GB of RAM in 2021 and beyond, otherwise whenever possible, try getting a little bit more, if you are a content creator or a gamer who likes to stream on YouTube or Twitch.

While the 144Hz display on the Eluktronics RP-15 seems attractive for gaming, the 120Hz on the Zephyrus G14 is a bit more color accurate and would be more attractive for those looking for a decently colored display for their beginner to intermediate creative tasks.

“Color space covers approximately 60 percent and 92 percent of AdobeRGB and sRGB, respectively, to be in line with most every Zephyrus laptop currently available. You’ll have to look at the Asus ZenBook Pro or ProArt series instead if you want deeper and more accurate colors fit for professional graphics work.” (Notebookcheck)

Here is a speed test of the SSD that Asus Zephyrus G14 houses:

Unfortunately I could not find a speed test for the Eluktronics RP-15, but when I do, I will make sure to update the post with that video as well.

The storage should be more than enough though, for day to day tasks and even storing games and your video editing projects or graphic design projects, if you are a beginner or intermediate. If you are a professional who does this on a daily basis regularly, these laptops aren’t the ones you should be looking at anyways, get a better and more color-accurate laptop that’s designed for professional use.

The issue with these laptops that I was talking about, is that the Eluktronics RP-15 has driver issues which cause its USB ports to stop working and doesn’t even let you install Windows! A customer shared his frustrating and annoying experience with this laptop that because it is a less known company, the drivers are not going to be updated soon, so he has to wait it out and live with the frustrating until they fix the issue!

So what’s the issue with the Zephyrus G14 then?

Well, fortunately, this issue is fixable, unlike the Eluktronics RP-15 where you have to wait and be at the mercy of the company when they update the drivers and fix the issue.

Zephyrus G14’s is that it gets blue-screen errors here and there randomly, which IS annoying and is fixable, but still is very unfortunate. The customer who shared his experience about this issue said that he talked with Asus on this and they told him to format the drive. He had no choice at this point so he did format while all his applications and software were installed already, and he was finally able to fix the issue by formatting the drive.

So the tip here would be that you should format it BEFORE installing anything on the drive, so you don’t regret having to format while looking at all your hard work going down the drain, as you’d again have to re-install windows, driver updates, and all the software that you installed before. So do it before you install anything important.

After looking at all the specs and comparing both these laptops together, I’ve come to the conclusion that the Asus Zephyrus G14 is a much better option than the Eluktronics RP-15, especially when we look at the problems or the shortcomings that both these laptops have. Zephyrus G14 is more color accurate, has a superior design and build quality, and has “style” that the Eluktronics RP-15 can’t even come close to!

If you are looking for a gaming laptop as well as a laptop that you can live-stream with or edit videos with, the Asus Zephyrus G14 is the one you should be looking at, especially when compared to the Eluktronics RP-15!

The Eluktronics RP-15 is not worth it, especially with its shortcomings!